I’m so PROUD to say that I know this incredible woman. I was BLESSED to meet her at the start of my Breasties journey. Stacy believed in me so much her friend Victoria (a breast cancer survivor) mentioned in the article and pictured here (article link at the bottom) and herself were one of my very first Breasties prints. Stacy has raised over 1 million dollars for breast cancer via the American Cancer Society and has turned her passion into a lifestyle. I can remember one of the first conversations I had with her she hugged me so tight and I later learned hugging is her “thing” when she asked for a “hug” themed Breasties painting. Anything for this amazing woman, but do you know how hard it is to create a hug themed painting ; )

This journey in philanthropy has so many highs and Stacy is by far one of the highest. I look forward to working with her in the future as Breasties makes the transition into contributing more to the American Cancer Society

Click to read the article that Stacy was recognized in to learn more about just how AMAZING she is!

BIG GIGANTIC HUGS TO YOU STACY!!!

In Boo's News, Breasties Spotlight by Elisabeth on November 13th, 2014 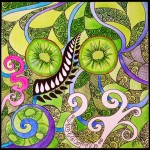 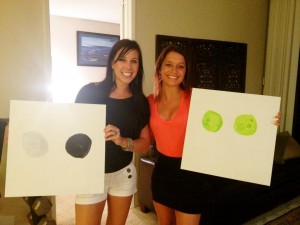 Since that day I have been painting the Breasties Bachelorette collection. I am so grateful for all the ladies and one man that produced a print and brought so many fun and challenging concepts to the table. But there was something about Bronny’s passion for Kiwi’s that represented home to her, that heightened so many different emotions.  After my first meeting with Bronny we exchanged a few emails so I could get a better idea of what exactly she wanted. I know, I know – the girl wants Kiwi’s, but why?!  She explained to me that she grew up in New Zealand and kiwi’s are native to the land and represent her NZ heritage.  She also asked me to incorporate “Maori Korus” and a fern which are symbolic to her homeland.  I quickly went to Google (naturally) and researched “korus” and the NZ fern. I found beautiful depictions of the native green fern that make New Zealand  so breathtaking.  From there, I had a vision and Bronny’s painting was underway! END_OF_DOCUMENT_TOKEN_TO_BE_REPLACED

In Breasties Spotlight by Elisabeth on November 15th, 2012 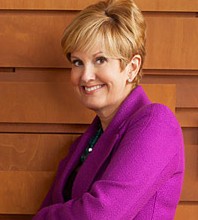 We all know her as the sharp shooting southern bridal shop owner on TLC’s hit show Say Yes to the Dress Atlanta. She makes bridal dreams come true and lives to hear those famous words “I am saying YES to the dress.” Now Lori needs a little southern lovin herself. She was recently diagnosed with breast cancer and has documented her fight – Watch Say Yes to the Cure: Loris Fight on TLC Friday 10/9 central.

In Breasties Spotlight by Elisabeth on October 26th, 2012 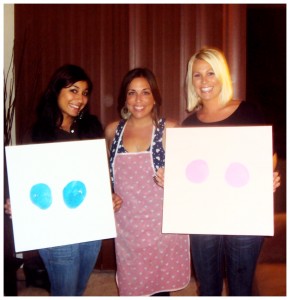 Today I finished Lauren’s Sweet sweet sundae themed heart breast painting. It has been a long time coming, and I appreciate her patience! I was very excited back in October when she did the print and became a Breastie.  She attended a small Breasties party hosted by a mutual friend of ours. Not only did she produce her first Breasties print, she also received the highest score on the Breast Test, and still remains the highest scorer to date!  Lauren knew what theme she wanted going in, and after a little brainstorming we were both excited about the vision we had.

Lauren had viewed the Breasties gallery prior to the party and took a liking to my personal heart breast painting themed, Sweet Tooth. Both Lauren and I have a sweet tooth in common.  She enjoyed the playful take I portrayed on my canvas, that painted a fun and colorful theme of my favorite strawberry ice cream flavor.  Lauren liked the combination of colors on my heart breast painting, mixing in pinks and light blue to give it that classic ice cream parlor feel.  There is just something about the right hue of blue that says old fashioned ice cream parlor. Lauren and I both agreed that her Sweet Sweet Sundae theme should contain this classic color as well.  She decided that END_OF_DOCUMENT_TOKEN_TO_BE_REPLACED

In Breasties Spotlight by Elisabeth on February 1st, 2012