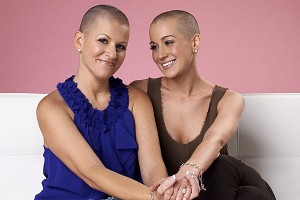 She isn’t going crazy or preparing for an acting role but she is playing a role, the role of the ultimate best friend.  Kellie Pickler has been country music’s sweetheart since we first heard her twangy tunes on American Idol back in 2005.  Since then, she has shared her personal struggles through her hit single Wonder and empowered young women with song lyrics from hits like Red High Heels and Best Days of Your Life.

Today she is humbled by her recent marriage to hubby Kyle Jacobs and while still focussed on her music career she tries to stay close to home. Kellie is counting her blessings and trying to live her life to the fullest. 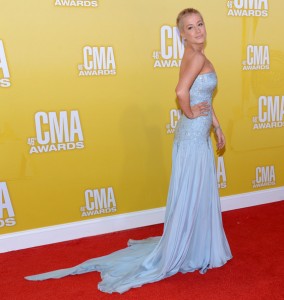 So when her best friend, 35 year old Summer Holt Miller came to her with a breast cancer bomb, Kelly immediately took on the role of number one support.  In fact Kelly was so supportive of Summer’s cancer diagnosis that she opted to shave her blonde locks along side her best friend.  Early September the friends lost their locks in front of television cameras and just last night Kelly revealed her new ‘do’ to America via the CMA Awards stage in Nashville.

Since her unveiling last night, tabloids, critics, newsrooms and celebrity bloggers have been discussing her recent hair loss and although Kellie has been awarded cyber high fives across the board, I find it a bit disheartening that the common phrase being used to describe her “sacrifice” is “She still looks beautiful”  – Can we talk about something other than vanity for just two seconds please?! What Kellie did IS beautiful and yes she IS a beautiful girl but someone has been diagnosed with cancer, can we recognize the courage, devotion and selflessness that takes place when cancer has showed its ugly face? I think we can….

So here’s to Kellie! What you did was incredibly courageous and selfless, especially for a woman constantly in the spotlight.  Breasties supports your efforts to make a statement and spread awareness.  We wish Summer strength, happiness and health.  Oh, and Kellie – You are BEAUTIFUL inside and out.